Made in EU: The long road to European health technology assessment 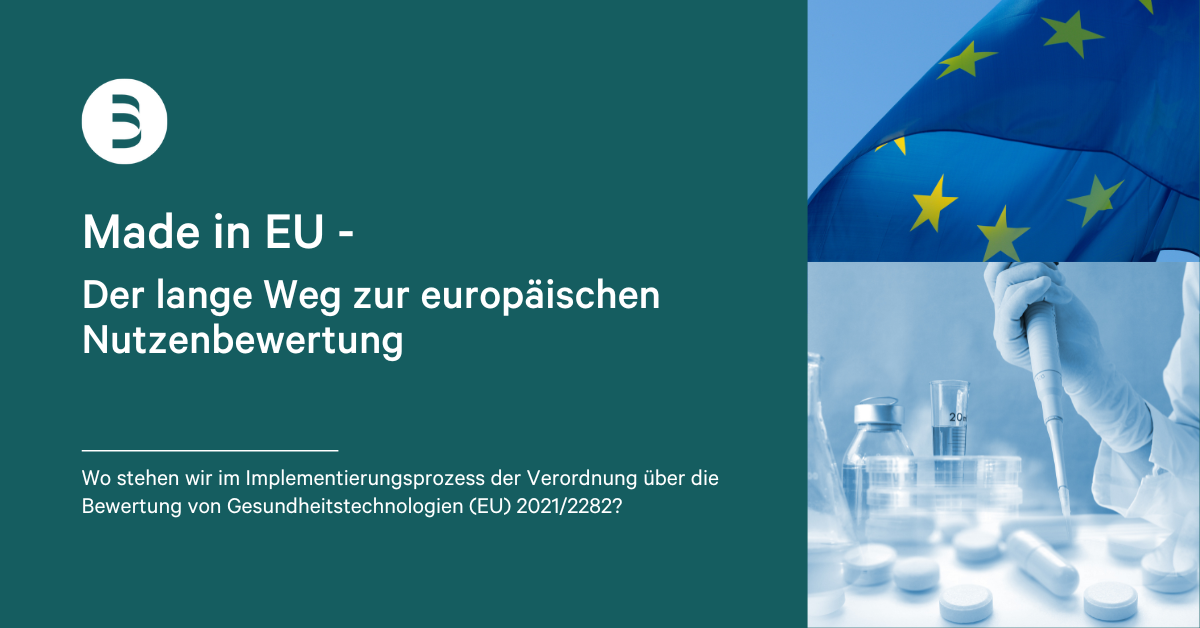 The joint vision for the European perspective on health policy was announced by Commission President Ursula von der Leyen in 2020 in her State of the Union address: a strong European health union that pools forces and harnesses potential. Synergy effects should be generated, for instance, by a European pharmaceutical strategy that includes guiding ideas along the entire life cycle of a drug: from research and development to early access to innovations for all EU citizens. An important pillar of the pharmaceutical strategy is EU HTA. After decades of preparatory work, a regulation for a European benefit assessment has now been launched at the beginning of this year.

What is the EU-HTA about?

The benefit assessment of health technologies such as innovative drugs and medical devices determines the financial success of the products’ market access. In Germany, for example, the extent of the additional benefit compared to the appropriate comparative therapy for the pharmaceutical manufacturer in the AMNOG process determines the scope for the rebates and thus the reimbursement by the statutory health insurance funds.

As to the history: An integrated European benefit assessment has been discussed since the 1980s.

In 2005, 35 national HTA institutions joined a network to exchange working methods and discuss evaluation. This was followed by promotion and monitoring by the EU Commission, which provided financial support for this initiative.  In 2018, the Commission finally presented a proposal for an EU- HTA procedure, which, however, met with fierce opposition. In particular, member states that already had an established HTA process, such as Germany, rejected the Commission’s draft, pointing out that greater consideration should be given to the specifics of national healthcare systems.

In the summer of 2021, the European Council and the Parliament finally agreed on a legislative proposal on the EU-HTA procedure. This was adopted in December of last year. With the entry into force of the Regulation of the European Parliament and of the Council on health technology assessment and amending Directive 2011/24/EU in January 2022, the assessment of pharmaceuticals and medicinal products will now gradually take place at European rather than national level from 2025 on.

For this purpose, the regulation provides for the establishment of a new “Member State Coordination Group”. Each EU country is to send representatives to the coordination group who are independent of industry interests and who will develop rules and methods for the joint clinical evaluation of health technologies, and who will create consensus in the benefit assessment on the design of the evaluation process. Consensus will be essential for more intensive EU cooperation in benefit assessment. The Federal Joint Committee (G-BA) and the Institute for Quality and Efficiency in Health Care (IQWiG) are also involved in shaping the European benefit assessment.

The methodology in the EU-HTA should be based on international standards of evidence-based medicine and must not fall short of the standards currently still applied in the individual member states. The methodology must also have sufficient flexibility to transfer the results of the benefit assessment in a meaningful way in the different healthcare systems.

The draft regulation is the result of years of negotiation and many trade-offs.

In the future, large parts of the current AMNOG dossier, in particular modules 2,3 and 4, will be prepared on a European basis. The current timetable for the European benefit assessment provides for a gradual introduction of the HTA assessment over a period of 5 years.

The initial focus will be on oncology drugs and advanced therapy medicinal products (ATMPs), with orphan drugs to follow in the next step. Five years after the regulation comes into force, new drugs for the indications AIDS, neurodegenerative diseases, diabetes, autoimmune diseases and other immune deficiencies and viral diseases are to be included in the EU HTA. Finally, after eight years, all other therapies are to be considered. In principle, the draft provides for consensus for the assessment decision. However, it is explicitly emphasized that the member states remain free to conduct their own additional benefit assessments in the “context of their specific healthcare system.

For medical devices, a selection based on certain criteria defined in the regulation is to take place three years after the regulation enters into force. However, the evaluation with regard to economic, social and ethical aspects as well as price negotiations and reimbursement decisions will remain the responsibility of the member states.

Ambitious goals of the EU-HTA: Are early and harmonized access to innovation, promotion of competitiveness and financial stability of health systems compatible?

In contrast to the Europe-wide uniform approval of medicinal products by the European Medicines Agency (EMA), benefit assessment procedures such as the AMNOG were predominantly carried out at national level. This has led to unequal or distorted market access conditions at the European level, as there are divergences in national HTA procedures with regard to the acceptability of certain endpoints and the data basis. As a result, certain medicines are not available to patients in some EU member states.

For patients, better European cooperation in the evaluation of medicines could help ensure high-quality healthcare through early and standardized access to innovative products across Europe. Industry should be supported in driving research and development of especially those technologies that have a real added benefit for patients in Europe.

At the manufacturer level, the aim of the regulation is to standardize European consultation and clinical evaluation of drugs and medical devices. For smaller companies in particular, this harmonization is intended to reduce the administrative burden, as drug manufacturers will only have to submit dossiers for study evidence once at the EU level.

From an overall economic perspective, legislators for market access to new technologies also have in mind the balance between promoting the competitiveness of industry in Europe and ensuring the financial stability of individual healthcare systems within the EU.

Despite three years of deliberation and consensus on the wording of the regulation, many questions remain unanswered.

It is questionable, for example, how the procedures at the European and national levels will be coordinated, whether and to what extent additional dossiers must be submitted at the national level, and what requirements will apply to the methodology of these data to be submitted. This concerns, for example, the criteria according to which the appropriate comparative therapy is determined and its necessity for orphan drugs. The extent to which the different standards of care in the countries will be taken into account is also open at this point in time.

Another important aspect is the seamless transfer of the EU-HTA results into the German context and the evaluation by the G-BA so that operational preparation for the price negotiations with the National Association of Health Insurance Funds (GKV-Spitzenverband) can take place.

The above-mentioned uncertainties have an impact on planning security for pharmaceutical manufacturers, both in strategy development and in the organizational set-up of Market Access, Medical and Regulatory Affairs Departments.

The more closely the methodology is aligned with German standards, the more important European HTA will be for reimbursement amount negotiations in Germany. Pharmaceutical companies must now also prepare for the new European benefit assessment following the recently adopted AMNOG reforms in the SHI Financial Stabilization Act (GKVFinStG). A detailed analysis of the conceivable scenarios is necessary in order to react quickly to regulatory developments and to bring the AMNOG into line with the European HTA procedure. The legislator now has the important task of adapting national legislation in such a way that competence wrangling and duplication are minimized and EU HTA results can be meaningfully transferred to the German healthcare context.